Yesterday I was asked to resolve a dispute which had arisen on some land which i purchased in 2003. At the time I was considering developing a medical clinic on the site but since then have got involved with helping Irene at IGF to expand her facilities on site. The land is a short walk from IGF on the way into town. There are two families living on the land. John Achola ( terribly disfigured as a result of LRA atrocities) and his wife wife Grace and their 4 children, living alongside a widow who works as a chef in the AIDs hospice, and her 7 children !  Quite a little community. I also discovered there is another man living in a tiny room on the land, paying rent to the previous owner !
A dispute arose over fights between the children and became quite acrimonious, leading to a district official being involved and a fine being made.
So in the hot sun, I walked up with Peter my interpreter and put on my family court (Judge Judy )hat to try and settle everything down and avoid blood shed on my land !  I believe it is settled now and i am considering what more to do with this rather nice place where the vegies are thriving.

Today the building guys moved one step closer to completing the incinerator and ash pit. I was intrigued to watch them lifting the pipe and supporting slab up onto the top lof the chimney.. quite a precarious undertaking... i was tempted to shut my eyes on a couple of occasions.

We were also excited to receive our drug order for the month from Kampala, ready to stock the pharmacy.

We did ward rounds in the AIDs Hospice this morning and it was a great opportunity for Dr Laurel to do some teaching of the medical team. 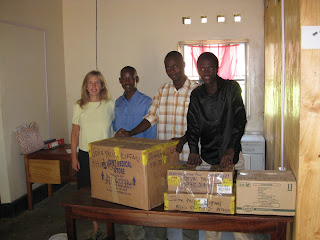