God is fulfilling His purposes

We can definitely see that God has a purpose to fulfill here and it has been amazing to be part of this and to realise that He has made the path straight and opened so many doors. The events of today just re inforced this so much. It started with some time of sharing with Irene over breakfast when we were talking about how we can be so anxious to see our plans worked out but in fact we can know that Gods purposes will prevail. Over breakfast, Irene shared with Vincent and I  a couple of scriptures:
one in Isaiah 14:24
"The Lord of hosts has sworn, saying
"Surely as I have thought, so it shall come to pass,
And as I have purposed, so it shall stand"
and Phillipians 4 :6 also came to us , and also Isaiah 9:6 where it talks about the government being upon His shoulders, not ours.
Irene shared about her own sense of reliance on God to keep things happening here despite so many sources of opposition. 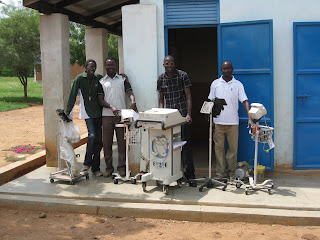 So , I set off  into the day  with a sense of peace and trust in God to work out His plans.
Then I joined the AIDS hospice medical team in their morning worship and prayer and I set about interviewing two Lab technicians together with Fransisco and Vincent.
We have found a guy called Joel who I believe will be an enthusiastic and hard working member of the team here. We showed him around and he was able to give us more information about fitting out the Laboratory just as the builders were on hand doing final alterations. He is also able to advise on the materials we need to set up a basic laboratory.
While this was going on, Benson and some of the other medics were clearing out a storeroom so we could put a ceiling in and make it an isolation ward.  In the room we discovered boxes of donated glasses ! (you will see in the photo above that the sunnies were much desired )... We need an optometrist to come and test our children as visual problems have been identified as a major issue in the classroom. At the same time, two examination couches were uncovered-- ideal for the consulting rooms!   And, there was also an ECG machine,  Electronic BP monitor and suction device which I had not even known were hidden away in there.  It looks like we will have a very well equipped and fitted out OPD ! 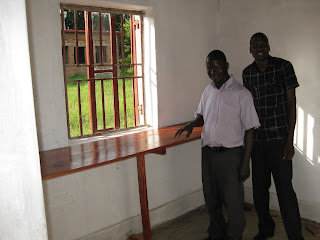 As Fransisco and I were walking back up to have some lunch at the guesthouse, the District Health inspector arrived in his motorcycle-- perfect timing !
He presented us personally with our signed and documented official health centre registration document  !  We then invited him for lunch and chattted away about local health needs for about an hour and he left in a jovial mood, leaving us gobsmacked and knocked out about how God had managed to get us through this with so little pain and angst.  Awesome !
In the afternoon, Fransisco and I were able to present one of the key administrators here, David with documents regarding the Roles and responsibilities of all thhe employed staff here and our recommendations on employment contracts for them, so please pray that we will experience unity of purpose about these vital issues which are very important in the process of building mutual  trust  in the medical team , improving morale and making sure there is recognition of the vital part these people play at the coal face in caring for the vulnerable and working in potentially dangerous clinical situations.
Down in the OPD, work is progressing with electricity wiring, final coats of paint and installation on benches in the pharmacy and laboratory. I am hoping and praying that after a thorough wash out and moving all the furniture in, I can do a day of consulting in the new centre. That would be so good.
Thanks for all who have been praying constantly about these things . I am sure it would not be possible without you being so faithful !