Doctor A gets makeover

Dr A today made a comment about the nice new hair do one of the nurses had today. Soon after he was seen wearing her afro wig!  He is undergoing treatment for a bad case of head lice! ( and all that after speaking on basic hygiene over FM radio the night before) 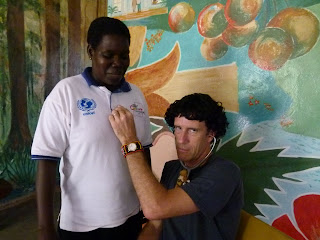 Dr A also participated in a continuing medical education session in the AIDS hospice, along with Rowena and Rebecca (visiting midwife from Oz) .

We are keen to implement some protocols in the clinics to up the standard of care and next Monday plan to travel about 2 hours out into the country to a branch school of 1500 students where there is also a school clinic manned by a health worker.

The painting of the outpatient clinic continues and we are having some shelves built for the small laboratory and pharmacy. 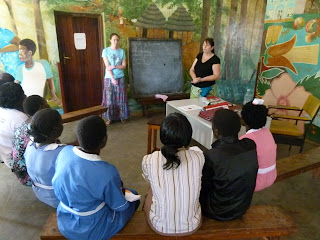 Andrew  R has been getting metal for the metal  scaffolding which the vocational students will construct and hopefully this will be a pilot project for possible future constructions which could be hired out or sold to raise funds.

Andrew W has been asking around to see if any of the local NGOs want to sell a second hand ambulance  and we could possibly raise funds for this back in Australia as it would be a great asset for the health services here.

The three of us are also fighting over adoption rights to little Dennis, aged 6 months, whose mother died soon after birth of AIDs. He is receiving nutritional support, but his only carer is his grandmother who already has six children and is breast feeding the youngest. They are very poor.
Today, Irene also uncovered a small Ultrasound machine in one of her cupboards which had been donated  and this afternoon we did a practice run on a willing pregnant volunteer. Prisca in the pink has been sponsored from childcare and is keen to do antenatal checks in the clinic here. We need an ultrasonographer to come and train us !!!

This afternoon A and R met their sponsor child and Andrew met the child sponsored by his sister Dorothy and Bill.   A special time ! ... and another day is almost over....