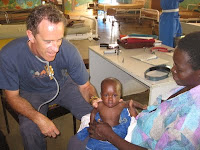 Andrew W and Rowena started assisting in the AIDs hospice today, working alongside Fransisco who is Nurse/Clinical Officer in charge of the centre  and works alongside two other Nurse Aids . The centre has 28 inpatients including about 18 children all of which have HIV /AIDs and require antiretroviral drugs and nutritional supplements. The patients are also susceptible  to infections such as TB because of their lowered immunity. We started to see the patients today but were overwhelmed by the multiple medical problems. One lady had been admitted to the hospice weighing only 26kg and we discovered she was blind due to viral retinal infections and also had symptoms of peptic ulcer for which we started treatment. Another 12 year old girl with HIV had developed a fever and headache and had symptoms suggestive of meningitis . Most of our day was taken up getting her to St Josephs hospital for tests, waiting for attention from the skeleton nursing staff and getting transport arranged. Rowena had to stay with her in the ward for several hours because she had no other family carer and they would not admit her unless someone was  able to be with her to feed her and attend to her needs.  It has been very exciting to see the rapid developments in the last two days  toward getting an improved primary health clinic within Childcare, hopefully where some basic diagnostic tests  such as malaria smears will be available. ( see the chart  of rising cases in the community-- deadly to the children here) .   Irene has agreed to allow us to fit out an empty building which was constructed for another purpose. We drew up some  plans for 3 consulting rooms, a waiting room, a pharmacy and a small pathology lab plus a room which could be used for short stay or isolation cases. Andrew R went today with the building team to buy the supplies and they are planning to start construction tomorrow ! It would be great to see this facility up and running before we leave and have a place where the children from the school and other people in medical need can be seen in a more acceptable environment. It would also be an opportunity to establish some good policies and procedures which can be followed across the board.  Andrew R will  be working with the building team tomorrow and Andrew and Rowena returning to the hospice to work with the primary health team. We are praisng God for answered prayers and appreciate your contining support and prayers expecially for protection from malaria as the mosquitos are in abundance !
Posted by doc andrew at 9:17 AM